Backyard: Two birds and a butterfly

I have been away from nature-watching for over two to three weeks, and as a result, I decided to watch outside my window, carefully, and see if I could, anything worth recording. I wasn't disappointed! Yesterday, I stepped out of my home in the afternoon, armed with my Canon DSLR 550D primed with the zoom lens, and waited, waited and waited, till the COPPERSMITH BARBET couple rewarded me with a very close look as they flitted from one low branch to another, of the giant Tamarind tree that graces our compound's terrace garden.  I kept taking pictures, and they kept obliging with one pose after another. Here are the best of the lot:

These photos are of two birds, but I cannot tell one from the other. Both of them kept much to each other, separated barely by a few feet. They kept at this dance for nearly 10 minutes, before deciding to pull the curtains down on their show and fly away. 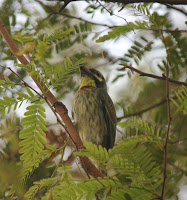 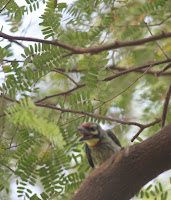 The Coppersmith Barbet is a Sparrow minus sized bird that looks colourful and very attractive. Its call, the repetitive tuk, tuk, tuk, can be heard in most parts of Western India, and particularly in Mumbai, on almost all mornings , especially in summer, which is its breeding season. The call resembles the sound made by a copper smith as he beats the sheet of copper in his copper smithy. A resident bird, it belongs to the family of whiskered "barbets". Recently, it was voted as the "Bird of Mumbai" in an online poll, where it was pitted against the ubiquitous house crow and the rock pigeon. 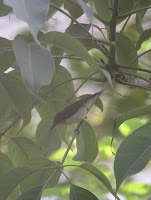 Okay, so here I was, happy to have done some nice watching, capturing etc. done on my camera. Today, I was getting ready to leave for the day, when I saw movement outside my bedroom window. There were at least three birds, possibly the same species, that were moving among the leaves of the tree right in front of me. Then, I got my first good look at the bird that floated on to the exposed branch of the tree. It was either a black headed munia, or, wait ... could it be the PURPLE-RUMPED SUNBIRD? It was! I ran inside the room and fetched the camera to take pictures. The birds obliged, and I clicked, first one, then the other, then the third ... They stayed for about 3 minutes, but I got my snaps, and also my positive identification. They were, indeed, purple-rumped sunbirds. Here are the photos.

The Purple-rumped sunbird is a sparrow-minus sized bird that feeds on nectar from flowers. While the male is colourful, the female is relatively less remarkable. Uttering brief and repetitive chirps (not more than 4-5 in each burst, though), the bird is a delight to watch.


I also took some photos of a bunch or two of flowers, and a species of butterfly that I do not recognise, while it sat upon some leaves, unmoving, doing what butterflies do best. Here are the few pictures that passed the grade for publishing on this blog: 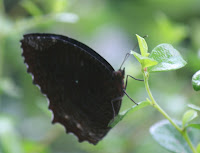 I will post a little more about the birds featured in this post at a later date. In the meantime, do leave your comments about the photos and the overall presentation of this post. Thank you.


For links to the two birds in the post, go here and here.