ARAFAH continued.
There is a requirement to stay and pray in Arafah till the sun sets on the 9thday of the month of Dhul-Hajj, so everyone must come to spend his/her day here. Prayers recited here are believed to be “always” heard by Allah, so people pray very fervently at this location. I discovered, during the morning, that although we were in the shade of a tree, it gets very hot indeed, and it is almost impossible to stay within the tent! I therefore meandered about, here and there, trying to locate any of our other doctor colleagues, from whom Dr. Measser and I had parted the previous night. I finally found them all under a communal shade proferred by a large, billowing plastic sheet, sitting on rather comfortable carpets amidst the buses parked around them exactly where we had got off the bus yesterday night. It transpired that Sk. Jamal and his men had actually organized this way of spending the day! Most of the entourage were lazing under the shade, and some were actually sleeping!
At that moment, a thought went through my mind: had I NOT brought my own little tent, I would have stuck around with these people rather than follow my friend and his family … and what a nice thing that might have been. In the event, I decided to stay with the others for the rest of the afternoon, and even enjoyed a small nap. At half-past four, I woke up, went to where my tent lay, and with a little help from Dr, Measser, I disassembled my tent, folded it into its cover, and took his leave to join with the rest of my co-passengers. Dr. Measser, too, came within the next half an hour. We prayed the Asr’ prayers, and then, the “camp” was broken, and we gradually returned to the confines of our bus for the next phase of the journey.
Like it or not, the general exodus of thousands of vehicles meant only one thing: although we were ready to leave at half past five, our bus started its journey only after half past seven! We covered the short 5-6 km distance from Arafah to the next place on our itinerary, MUZDALIFAH in about six hours.
MUZDALIFAH: Day 2 of the journey/9th of Dhul-Hajj month of the Islamic Calendar:
It is at Muzdalifah, among the sands of the desert, that we have to spend the night of this particular day, praying and sleeping. Also, it is from here that one needs to collect, rather carefully, about 49 stones for a future ritual of Hajj, the traditional stoning of the three Satans at Mina (read about this later). The stones must be collected at Muzdalifah; one may collect either 49 stones, or 70 stones - and one may collect a few morein case one loses some during the next few days. The stones must not be very big and not very small either. The first restriction is imposed to prevent injuring others who are also present at the stoning; the next one is imposed to enable one to throw the stone properly from a distance of between 3-10 meters. Hence, the size must be about half a cm in diameter. No more, and no less. 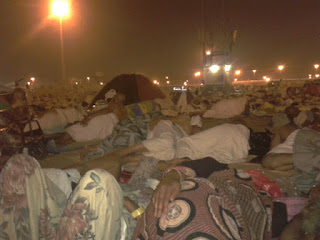 We reached Muzdalifah at about mid-night, and as at Arafah, I found myself a place amongst the thousands of other people to lie down for the night. I decided against using the tent, but slept on my sleeping bag that I had also carried with me.
It was at about half past three that our group decided to start the return journey from here to the next phase of our journey, viz. going to MINA. This – our early departure – was a bit unusual, since books mention that one must stay at Muzdalifah till the dawn, pray the morning prayers and then proceed to Mina. However, the Islamic scholars among us opined that it was okay to proceed after a few hours’ stay.
Hence, we moved on.