Bird watching in the back-yard

... Or almost. In our society, we have a terraced garden, well endowed with flowers, interesting plants and at least six or seven full-grown trees, including two red cotton-silk trees, one tamarind tree, one jamun tree and a few others. I have almost never given undivided attention to our garden for the simple reason that we have taken it for granted.
Thus, I was pleasantly surprised to see an unusual bird among the branches of the cotton-silk tree. Its small crest and a red vent proved it to be a Red-vented Bulbul. I saw it and its mate several times during the day, but these birds were so active and busy that they did not allow me to get even one photograph. 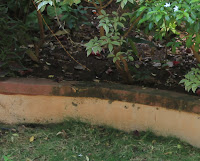 The next bird to arrive was the Oriental Magpie Robin. This bird sat on the ledge that borders the walkway and the shrubs in the garden and started walking around on this platform, its tail going up and down with a ridiculously comic effect. I was watching it from my window, but I got in one photograph (see alongside: the bird is cleverly hidden but one can see it by the white strip on the left wing) before it flew away.
Then, after a short while, a tiny Purple-rumped Sunbird alighted in the branch of the tree opposite my window. Alas, it flew away as quickly as it had come.
I posted my sighting of the above two birds on my facebook wall, and proceeded to work. When I returned in the afternoon, I went to the window as soon as possible, and was immediately rewarded by the sight of a male Asian Koel. Over the next one hour, I saw and photographed two males and three females, and the next five pictures are of these birds sitting in various trees inside our society's garden. 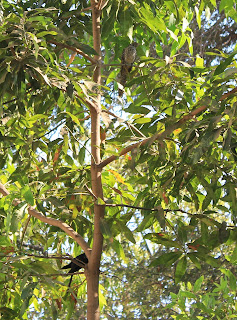 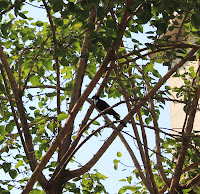 In the photograph on the left, one can see a male Asian koel with an unusual white throat patch sitting on the tree. In the final photograph (see below), one can see a female of the species camouflaging itself within the branches of the tree. 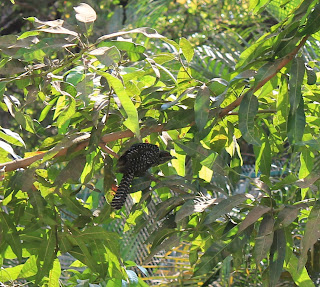 This completes the photographs of Asian Koels that I took today afternoon. Hope you all like them.