Coming as it did within 24 hours of my visit to the Sanjay Gandhi National Park, I wasn't very hopeful that this outing to the Fort area of Mumbai would excite me. I was pleasantly surprised, because this outing helped me identify not just trees but also shrubs and garden plants. 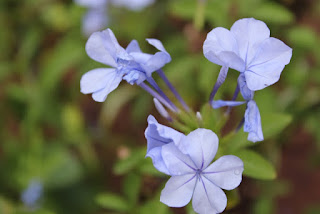 We were a group of 15 or so, and our guides were Mr. Marselin Almeida and his student Santosh. Also with us were a journalist and a photographer from Mid Day newspaper. Some of those attending today's outing were old hands at this type of activity. Vandan from BNHS was also there. We started our spotting activity from opposite the Churchgate Railway station at or around 8.00 a.m., and finished at around noon outside the corporate HQ of the BNHS. En route, we saw over 70-80 different species of plants shrubs and nice trees too. We also saw, for the first time in my life, a pair of Coppersmith Barbets, a Female House myna, lots of "domesticated" birds such as crows, pigeons, etc.
Here is the link to the pictures I  took on this outing. Click here. This album has photos along with some information on what the picture is of, as well as the technical aspects of the camera work.