Trip to Missan: a new place, and what an experience! Day 1

A day after my return to Al Muwayh after my five day stint in Ta'if, my medical director informed me that I was being sent to a place called MISSAN. This small village, located 100-120 km south of Ta'if, is one of the southernmost places administered by the Ta'if Health directorate. I was going there because the pediatrician over there was either away or not available. My duty would be for the WHOLE week, from Saturday, 1st June to Friday, 7th June 2013.

I was understandably peeved, as I had just unpacked my bag just a day before, and here I was being asked to get ready once again to leave my house. However, I had already been intimated about this duty a month ago. so I had to agree. I went back home to pack my bag. This time, I decided to take with me my water boiler (for tea), some packets of biscuits, a box of cereal (Kellogg's Special), tea bags etc. and also my cable TV receiver. I wasn't sure what facilities would be available there, and what would not, hence the overkill!

Missan, with a population less than half of Al Muwayh, promised to be an utterly boring place, and I was not very hopeful that I would be able to access the net either. Also, it is almost 350 km away from Al Muwayh, and I wasn't going to offer to take my car there. I told my medical director to send a hospital vehicle to my place within an hour, when I would be ready to leave. Thus it was that the driver came over to my place at half past eleven. He informed me that he would only leave me till Ta'if, where he would co-ordinate with a person from Missan, who was waiting at Ta'if to take me to his village in the south. Well, that was a sensible arrangement, wasn't it? Who was I to complain?

Accordingly, we completed the first leg of the journey in under 2 hours, and then, we were met by one Mr. Abdul Aziz, who is the Head of Nutrition services in Missan General Hospital. An employee of the MOH, Abdul Aziz lives in Ta'if and goes to Missan periodically to meet his job requirements. He turned out to be a young, dynamic person. When I suggested that we have a meal before proceeding further, he readily agreed, and we had a typical Arabian meal of rice and dry chicken with a side order of cooked okra in a nearby Bukhari restaurant. He footed the entire bill in spite of my protestations not to do so.

The second leg of the journey is about 130 km if you access the eastern approach, and about 100 km if you take the western, alternate route to Missan. Abdul Aziz took the first option. The road starts winding up the mountain sides and narrows down to just one lane on both sides. However, the road quality remains excellent as you drive up and down the curves and the narrows. What does enthrall you, however, is the complete change from a barren desert environment into a cooler, greener one with rows of trees, farms and grass ... did you just ask if I really wrote that? Yes, well, I did. And here are some pictures to prove it.

My glum demeanour had already transformed into that of an eager, excited person, who is seeing something for the first time! And it was like that. I have never before seen that much greenery in the kingdom. So, here I was, being driven past green farms, trees, herds of sheep feeding on the grass and such other sights. 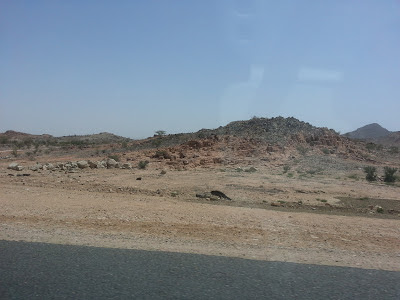 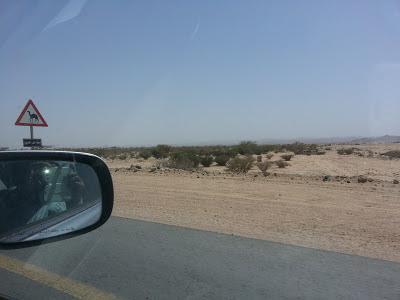 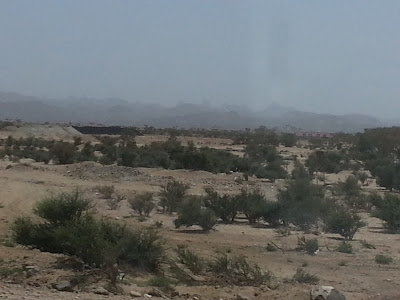 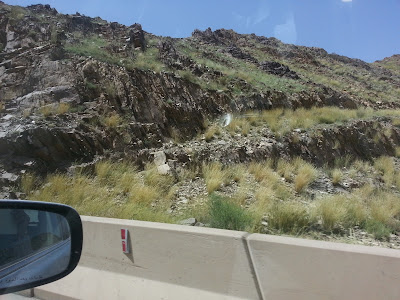 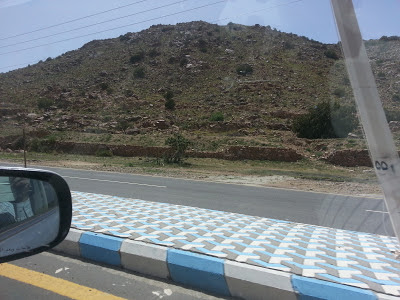 I reached the portals of the Hospital at a little after 2:30 p.m. I was acquainted with the Hospital director, the Medical Director and one of the senior nurses. The nurse took me around the place, showing me the wards, the OPD, the delivery room, the ER and the OR. I realised that this hospital is an old one. because it resembles the hospital I had been posted to earlier this year - the one at Khurma. However, I rather liked this set up because the hospital is built like a square block rather than the long structure that we have in Al Muwayh.
The rest of the day passed without any active incident. I met the various doctors in the OPD as well as the ER, met many of the nurses here, some of whom are Indians. In particular, I would like to mention Dr. Bala and Dr, Ummu-Salma, both anaesthetists from India, Drs. Eftikhar, Akil and Sahar, all ER doctors, all from Sudan, Sisters Jocey, Aimee, Virginia, George, Mercita ... from the Philippines and India (Jocey) and others. The M.D. Dr. Qaiser, is a Kashmiri doctor. Over the coming days, I would meet many more doctors as I went about my work, but the first impression I had was rather nice. The subordinate staff helped me set up my "room" ... one of the in-patient rooms in the Male Ward that has been given up permanently for doctors who come to Missan as substitutes for the Pediatrician. It is then that I discovered that their Egyptian pediatrician actually passed away a few months ago, and different doctors from various places have been substituting for him since then.
The room was a patient room, yes, but it had all the facilities one would look for, including a hot water geyser, a TV, working A/C, 2 beds, a small but adequate almirah, and so on. There was no ventilation, and this was causing some stuffiness, so I "borrowed" a table fan from the Nurses counter in the Female ward. The bath drainage was choked and I had a tough time with this, as, by the end of the bath, I was standing in ankle deep water.
My first hospital meal was today's dinner. It was the typical hospital meal with rice, khubz and a big piece of chicken and a side dish of some overcooked vegetable. There was a sugar-free china grass dessert (the only dessert they seem to make, since I had it over 10 times over the next 13 meals), a fruit and a chopped salad.
After dinner, I spent time chatting with Sr. Jocey, who was in the \male ward. Thereafter, I returned to my room and discovered to my horror that the Mobily internet signal was NON-EXISTENT in the room. I went out with the laptop, but the signal never improved, no matter in which part of the hospital I went, and I was forced to gnash my teeth and retire hurt to my room, where I glumly saw a few episodes of Grey's Anatomy Season 8 before going to sleep.

Your blogs are simply great taher
i simply enjoy them ....
best wishes