The vetical shades that hid the night from view did nothing to keep out the early morning sun as they were white. Thus, I woke up at about 5:00 a.m.! I snuggled back inside the covers and slept some more in the new environs of my shared room in the campus of Zalm General Hospital, and wondered what the day had in store for me. Finally, my room-mate and I both got up at a little after 7:00 a.m. and dressed to go to the hospital for the day's work. 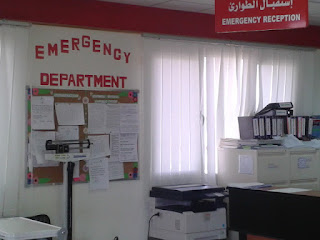 Earlier, I was called to the ER twice to see some sick children, and so, I had had less sleep than what I normally get, but both the children, thankfully, had nothing serious, and I could dispatch both of them after some basic tests and a prescription that they could continue the treatment with, at home.

The adjoining photo and the one below show the ER of the hospital. 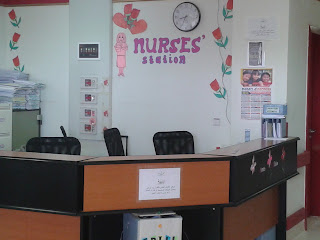 Zalm, like Al Muweh hospital, is more like a primary health center. and although it has intensive care units, a fully functional operation theatre, and all the equipment money can buy, these facilities are not in use, either due to the lack of trained personnel or the lack of initiative. It is also possible that many such hospitals all over Saudi Arabia are meant to serve just local communities in lieu of a robust private medical practice set-up in this country. Most of these hospitals are staffed by expatriates, such as doctors from other countries of the Arabian Gulf, Pakistan, India and so on, nurses from the Philippines, India, Sri Lanka, and so on, and subordinate staff from the entire Indian peninsula including a horde of people from Bangla Desh.
Only the admininstrative staff is local, and is culled from the same region as the hospital. The situation in Zalm was no different, but the difference was that the administrative staff seemed a whole lot more competent than the ones I have met elsewhere. The hospital itself looks shiny and new, and most of its departments are functional and well-maintained. The resident doctors were all respectful and polite, the nurses, extremely charming, friendly and efficient, and the subordinate staff , helpful and keen.
The next few pictures are of the room allotted to me (the one on the extreme left), and the access route to it from outside the hospital. 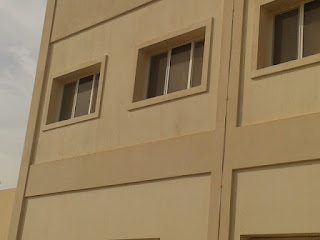 The next three pictures show the door of the room I shared with Dr. Prakasan, the room itself (with my bed) and the chairs in the lobby outside where the canteen service left our lunches and dinners for us to come and collect it ourselves. To their credit, however, it must be said that the lunches were packed hygienically. The main problem was that all the lunches were identical to each other, with sheer monotony preventing me from partaking of the dinner served to me on the next two days, but more of that later.
Today being a working day, I was required to stay in the out-patient department from eight o'clock till four p,m,, with an hour's break from noon till 1:00 p.m. for lunch and afternoon prayers. The nurse in the Pediatric OPD was one sister Gracie, a Filipino who was very efficient. Of course, it is quite a thing to say that she was efficient, because we saw a grand total of just FIVE patients, none critical, over the entire spell of seven hours! During the day, I also managed to hospitalise one child from the ER, a case of sore throat with high fever, and in the night, one infant with an accidental ingestion of one or two tablets of an antidepressant that his grandmother was using at home. Both the children stayed in the hospital for just one day, going home the next day.


All my meals were sponsored by the hospital, and on Wednesday, I ate my breakfast and lunch in the canteen. Dinner was sent to the doctors' quarters and was left on the chairs outside in the lobby as it was the night before.

After clinic hours, I went back to the room and whiled away the evening doing this and that - but mostly surfing the net and reading some stuff from the study material I was carrying with me. At about a quarter to six, Dr. Prakasan and I went out for a small amble, reaching one of the only two main arterial roads, where we crossed over to the opposite side to have tea in a local cafeteria. The sole person who served us our tea was a fellow-Indian by the quaint name of Alfaaz. He comes from Allahabad, the city in Uttar Pradesh which is on the bank of the river Yamuna. (This is also the city from where the great Amitabh Bachchan came to Mumbai to become a huge, huge superstar and a movie thespian the like of whom I have not seen in my entire life-time.)

After tea, we returned to the hospital, where perchance, I discovered that there was a password-protected wireless signal on my mobile. With some poking around, I had the password, and so, I sat near their "control room" and surfed the net for free for about an hour or so. At about half past eight, I went outside for my daily walk. Out of the hospital, I walked all the length of the small village and back, to register a distance of 3.25 km. I stopped at a grocery/convenience store for a banana and a bottle of water. Arriving back in the hospital, I continued walking around the hospital for some more time, so that I had logged in 5.25 km in all, burning about 250 calories. (My Samsung Ace has a downloaded app called Sports Tracker which uses GPS technology to monitor your exercise after you have entered in all the details. It will also display your speed, your pace, the map of the path you took, and if you connected a heart-rate monitor, a graph of the heart rate that you achieved during the given exercise. It also allows you to share the exercise parameters on Facebook and other social applications if you are connected to the net.)

After this, I returned to my room where Dr. Prakasan and I had dinner, and after some chatting with him, I opened my PC to surf the net. I went to sleep at a little after one a.m.

That's it for now.

I love the photos, and the glimpses into your everyday life (and that of your cohorts) as expats in the medical field in SA. It seems so different from the lives of doctors in the U.S.

Also, you see five patients in a day, whereas here - on any given day - a hospital E.R. would be full 24/7, and patients, not necessarily "critical," but decidedly ill or injured, could wait HOURS to be seen, at great cost.