The start of a new week, and I was still feeling down because of the computer troubles I had faced in the last few days. Dr. Tariq Khan joined us once again this week as the fill-in surgeon for Dr. Shahid, my room-mate and the surgeon from India who is likely to join back this week. Dr. Tariq is a very colourful person who minces no words when he talks about all and sundry. Blessed (perhaps that is not the right word) by the gift of an earthy language that uses all forms of words, legal, slang, non-vegetarian and so on, he can carry the house on his rather immense body frame without stopping even to breathe. His is a world of past shenanigans and present conquests, of stories from the wild to stories of the indescribable, of uncurbed emotions and unlimited imagination, of achievements that are breathtaking and sagas that are inspiring.


In a word, Dr. Tariq Khan is ... fascinating. Over the week, I had occasion to listen to him for hours, and I see in him a soul that can stir people. He befriends everyone easily. He has a great sense of humour. He is, doubtless, a great surgeon. A behemoth of a person, his weaknesses are mostly weaknesses of the flesh, and I can understand him perfectly, since I am, at least in that respect, more or less like him.


We ate out at the Pakistani restaurant on the other side of the highway today, and over the week, I would spend much more time with him, but that is for later posts.


The working week saw me examining 16 patients today in the OPD. I was off call, so there was no pressure on me otherwise. I called up my wife and kids tonight and wished them a happy St. Valentine's day for the next morning. I also posted a similar status message on FB. I watched Ek Main Aur Ek Tu today in the night. Starring Imran Khan and Kareena Kapoor in the main roles, this movie is just above average, but it is watchable. There aren't many hummable songs. The story is believable. I would rate this 3.5 stars out of 5.


Not much else to report. I did not get the time or be in a mood to post entries to my blog, but I did go to the net to read my mail and do the other routine stuff. The Fn problems are solved but the touch pad continues not to perform according to its specifications.


On Sunday, there wasn't anything much to share with you, dear reader. I did, however, call my parents and talked to them for a while. And, Dr. Narendra and Dr. Tariq came to my place for dinner. I served them the pasta, curry masala, dal and rice with khubz. Their honest appraisal was less than complimentary. We took some photos of the dinner meet. Tariq has a Nex 5 Sony DSLR which he had brought with him. It looks great and shoots superb pictures. Here are some of the photos we took that night: 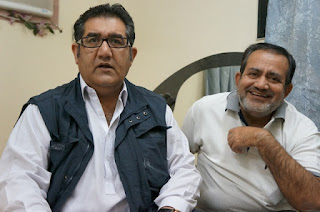 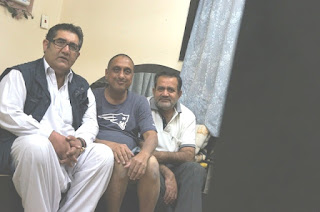 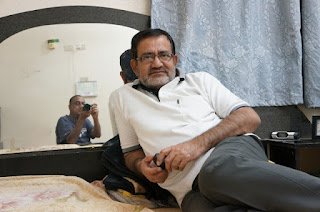 That's if for now ... will be writing a new post soon. Keep reading and commenting. Thank you.